The symbolism of the scarlet worm is one that I discovered just recently.

I enjoy symbolism. Symbols are a frequently used tool in art for imparting mystery and nuance to a work. The pictorial non-verbal nature of symbols suggests intrigue and entices the viewer to contemplate deeper meanings hidden by deliberate design in a work. They invite the reader to make connections with things known in order to better understand concepts that are challenging to fully grasp. 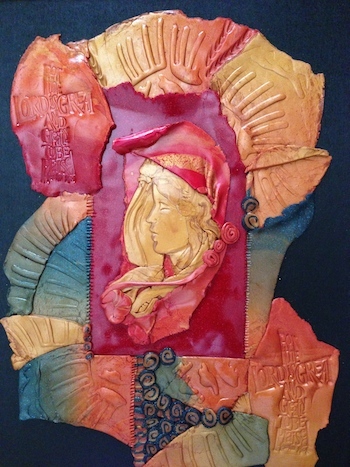 The Lord is great and greatly to be praised!

The Bible is replete with symbolism. What is astounding is the consistency with which the symbols are used, especially when you consider that no single author wrote it, but rather forty over thousands of years!

Symbols used in the Bible unfailingly represented similar concepts, regardless of  which author used them, or in which book they appeared.  Sometimes they appeared just once, almost seeming to stress the importance of the concept that is illustrated!

I find that fascinating - another perfectly logical reason for concluding that the Bible is divinely inspired and not of human origin!  What other deduction would be plausible? It is the creative work of One Author, God Himself. He dynamically inspired those forty fallible authors, over millennia, to express His plans and purposes for all mankind. Symbols are peppered throughout, woven through historical accounts, interspersed with poetry, commandments, letters, psalms... all a cohesive whole, telling a wonderful story of redemption. Studying these are a useful exercise. Each one that I understand fills me with wonder. 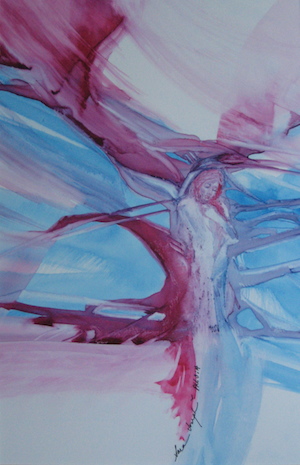 The Scarlet Worm symbol is breathtaking in beauty for expressing complex truths of Jesus’ mission on the earth in a comprehensive, yet subtle manner.

Do you remember Jesus’ words on the cross?

”My God, my God, why hast thou forsaken me? why art thou so far from helping me, and from the words of my roaring?” Ps 22:1

I used to think that those words were only a cry of anguish because of the physical torment that Jesus endured on the cross. But I discovered that it was far more than that. Jesus was quoting Psalm 22, familiar to his Jewish listeners, who were the horrified witnesses of his last moments on the earth. David, the beloved psalmist of Israel, penned Psalm 22 hundreds of years before Jesus quoted it. In his pain, Jesus only spoke the first verse, confident that His hearers knew the rest. He was reminding those despairing that they were witnesses to a phenomenal victory, rather than a defeat!

The psalm outlined in excruciating detail Jesus’ physical agony as he hung on the cross in our place for our sin. Then there was an unusual declaration using a strange word and a reference to a worm.

To a casual reader it would appear that the 'worm' was an apt symbol, descriptive of his contemptible status, battered and bruised on the cross, enduring the brutal punishment doled out to enemies of Rome. But there is more!

The Hebrew word for worm is 'towlah' a very specific word for a very specific worm. Another more common Hebrew word 'rimmah' could have been used, but it was not. Instead, 'towlah' was used, because this powerful symbol explains the miracle of the cross in an exquisitely simple manner. So outstanding is this symbol that it fills me with awe in the precision of its usage. 'Towlah' is a scarlet worm, the female 'coccus ilicis'.

Remember crimson was the color of sin, of the shed blood that paid for our redemption? The female scarlet worm preparing to bear offspring affixes her self in a permanent embrace to the wood of a tree.  So firm is her union with the wood that to remove her would result in breaking the firm crimson shell of her body, thereby killing her. Her young are hatched beneath her protective covering where they feed on her living body until they are mature enough to survive.  As the scarlet worm dies, she oozes a crimson dye that not only stains the wood beneath her, but also marks her young. They bear that scarlet stain for there rest of their lives! If that were not remarkable, consider this.

Three days after she dies, the carcass of the scarlet worm becomes white and waxen and falls off the wood like a snowflake!

Let me connect the dots for you as it applies to us, and all who trust in the death and resurrection of Jesus. Our dear Savior covered us with His body, died to bring us life and marked us with His precious blood! We grow by feeding on His body, broken for us – “This is my body…” remember?

I am His offspring, marked forever with the crimson stain of His victory. May I bear the stain of His sacrifice in a manner worthy of Him!

What thrills me even more is that even though my sins were as scarlet, they are now as white as snow! Not because of anything that I did, but rather because of all that He did, by giving His very life for me! Isaiah quoted those words over 750 years before Jesus carried them out!

This is truly one of the most spectacular symbols of the mystery of the cross that I’ve ever encountered in the Bible!  In ancient times the crushed scarlet worm had medicinal value for healing ailments of the heart!  The world is full of lost people, longing for the wholeness that only the life giving presence of Jesus in their hearts can bring. Oh, that they would turn to Him to enjoy life as it was meant to be lived!

Call it coincidence if you like, or fanciful thinking – but the presence of that particular word and that particular verse of this messianic psalm is inescapable and unmistakable! Anyone can search it out. This is just one of hundreds of such symbols, rich with meaning, hidden within the text of the Bible, waiting for the patient seeker to unearth and marvel.

The rest of the Psalm is equally thrilling – a jubilant hymn of praise for a destiny fulfilled in Christ. Read it for yourself.

I never want to lose my sense of awe for this awesome God who loves us so much that He would go to such lengths to reach each of of us! Jesus said that the kingdom belonged to those who would receive it like children, who enjoy much and don't trouble themselves with needing to explain everything!

Return from The Scarlet Worm to The Lessons of the Fig