The Sea of Galilee

That the Sea of Galilee was not a sea, but rather an enormous lake was quite a surprise to me. When I stood on its shores, its distant banks were often hazy and hard to discern because of its sheer size. I find it mind boggling to consider what these waters witnessed, since much of Jesus' ministry happened along its shores.

Boat on the Galilee
Oil on Canvas Board
11x14"
Sara Joseph 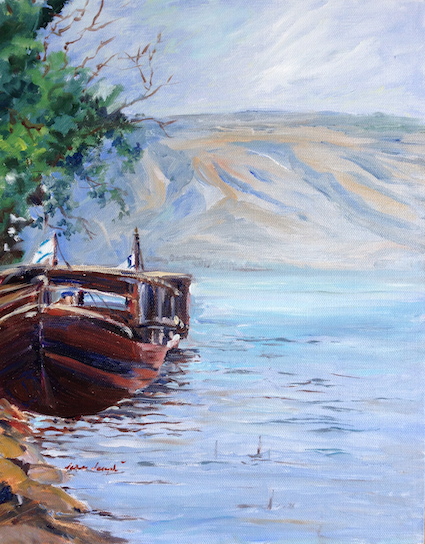 The first century historian Flavius Josephus records 230 boats that regularly worked the lake for its abundance of fish.  The Sea of Galilee is harp, or lyre shaped and so is often referred to as the Sea of Kinneret, (derived from a Hebrew root word for harp). Fed with fresh water from the Jordan and from underground springs, it is 144 feet deep in some parts. It is easy to imagine the thriving fishing industry that Simon, Andrew, James and John left to follow Jesus. Galilean fish have fed the locals for over two millennia. We too enjoyed a delicious lunch at a local restaurant well known for serving a fish from the tilapia family, aptly called Peter's Fish. Like other tourists we got quite a kick out of photographing it with a shekel in its mouth, in memory of the wonderful account in the Bible of the miraculous payment of taxes!

While there is much to be gleaned from the numerous references in the Bible of the Sea of Galilee, I am moved by the account of Jesus walking on the water. According to the Biblical account, it happened around three in the morning when the visibility was poor and the wind was fierce. The disciples, struggling with the turbulence on the Sea of Galilee, may only have discerned the faintest form of Jesus as He came walking on the water. It must surely have been a terrifying sight to those already wearied by the elements, until they understood who it was that came towards them.

There is such a spirit of adventure, faith and audacity revealed in Peter's request to Jesus.

The disciples were already conscious that something extraordinary was happening before their very eyes, something that was more than the wind-whipped waters tossing their boat about. There could have been little doubt that it was something supernatural, or even potentially dangerous.  Their fearful response implies that they were probably well versed in the superstitious beliefs of the day, assuming that He was perhaps a ghost or spirit. Fear clouded their recognition of their beloved Lord. Upon hearing Jesus, only Peter responded, requesting proof by making an outrageous request.

"Bid me come." he said.  I can almost hear his thoughts "Let me share this incredible, impossible and supernatural feat on this Sea of Galilee, where I have spent all my adult life and never had something even remotely like this happen!"

If I wrote the Bible to mirror how people imagine God must be, I would have had Jesus imperiously point out the arrogance of Peter's request. How dare Peter equate himself with God! To think that he would be permitted to share in what should strictly have been the privilege of deity!

Instead, Jesus kindly says, "Come." What a generous, gracious response!

I aspire to that confident faith of Peter, who when exposed to the thrill of  knowing first hand the power and person of God, boldly requests the privilege. It reminds me of children who while watching some adult at a skill far beyond their ability yell impatiently "Let me, let me!" certain that if they would but be given a chance, they too will be able to do it!

I love Jesus for not rebuking Peter's impulsive, childlike faith. Instead, He commended it to us, as is evident from His response to Peter. There is much to learn from that simple word "Come".

Come, because I, Jesus, am here to teach you how to join with me, as sons and daughters, children of the Most High God.

Come, because even when you waver, I'll be there to offer you the hand to lift you out into safety. Come, come, come.

Today, He still says "Come" to the weary, the skeptic, the bored and the jaded.

Yes, and even to you, dear fellow artist, His gentle "Come" still echoes from the Sea of Galilee. Walk on water, or whatever adventure He calls you to. As you step out of your boat of the probable in response to his call, He will empower you, and give you supernatural ability! Whatever you need, He not only has the power to provide, but also the desire.

However, you do need to have the brash faith that most today will call foolish and will blithely discount – the faith that would consider walking on water a possibility for YOU, not just for Peter in years past.

We all tend to excuse and disqualify ourselves from such faith, or even the need for it. But only to the degree we entertain that possibility, are we likely to see impossible. The other disciples never even considered the likelihood of joining Jesus on the water, except Peter.

I am eager to develop the priceless caliber of faith that trusts in a God who does not withhold but grants freely, if I will only take him at His word. This was who Jesus demonstrated He was, and still is.

"Whereby are given unto us exceeding great and precious promises: that by these ye might be partakers of the divine nature.." 2Pe 1:4

What are the possibilities for those who would dare take Him at His word? What sort of art would we create, if we did not watch the wind and the waves in fear? What thrilling discoveries would we unearth if our expectations were full of faith, our eyes only on Jesus, and our sights not on the probable, but the impossible?

Only you can answer that.

Return from Sea of Galilee to the Home Page