As a Christian I am Pro-Life. I never dreamed that I would have to update this page in the wake of the Supreme Court decision overturning Roe vs Wade. It seemed impossible in my lifetime! 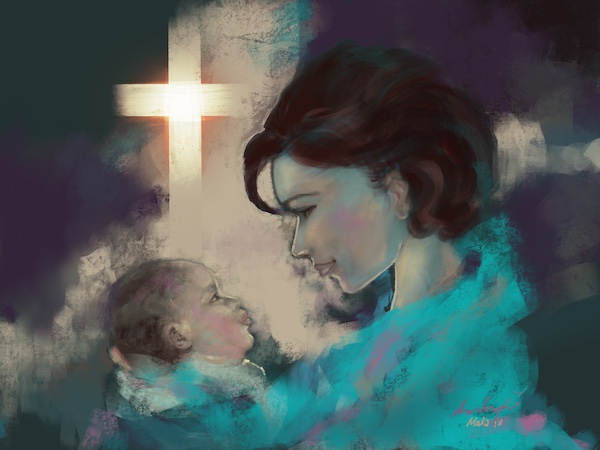 The fetus was once considered a blob of tissue in the woman's body—as inconsequential  as a tumor and just as trivial to remove. Nurturing, or discarding it, constituted the woman's "right to choose." Abortion, especially if it was the fruit of rape or incest, was argued on the grounds of compassion, since the fetus was just an unwanted mass of flesh.  Getting rid of tangible evidence of trauma is argued as humane, even if the percentage of such cases are less than one percent! Today, louder voices cry that "women will die" by resorting to desperate "coat hanger" methods to rid themselves of the blob. Of course, abstinence until marriage never seems to enter the dialogue.

As an artist dealing with the visual, sensory input, I am grateful for technology, which has come a long way to debunk the "blob" mindset. It decimates such a position by giving us an up close view into the womb. Every stage from conception to birth is now observable. We can watch in wonder as babies turn over, pout, yawn and suck their thumbs.

We can no longer remain silent when images of babies screaming in pain during abortion or shying away from deadly instruments of medical destruction are easily available on the internet. We dare not be ignorant of evidence exposing the horrors of the abortion industry, nor be fooled by their deceptive language of concern about "women's reproductive health."  The reality is that they rake in enormous profits from the sale of aborted fetal tissue and organs.

The unborn child has a beating heart in as few as 18 days from conception, brain waves are detected in as early as 6 weeks, pain can be felt in as little as 9 weeks.

Most abortions take place around about 9-10 weeks. At that time the unborn baby will make a tight fist if his palm is stroked. He will curl his fingers around an object that makes contact with his palm. Far from being a blob of tissue, this new life is a little person with a God–given personality, spirit and destiny.

These are well known facts for anyone who would care to investigate the pro life position. But facts don’t speak to us as stridently as something visual.

Art and technology, when combined, create a tangible experience for the pregnant mother. I found it cleverly combined in an invention designed by Dr.Jorge Roberto Lopes Dos Santos, a Brazilian designer.

His invention gives form to the ghostly images of an ultra sound. Plaster models in the round are developed using 3-D printing technology called rapid prototyping. Data from MRI and ultrasound scans are converted into scaled models that the mother can hold and run her hands over. Seeing and feeling the reality of this unborn life speaks far more to her than vitriolic arguments!

Apparently a blind mother has signed up to try this technology. I can only imagine the intensity of her response, running her sensitive fingers over the form of her baby, while recreating in her mind’s eye the beauty of the precious gift within her womb!

In the art world, provenance is an important criterion for establishing a credibility of a work of art.

No one but the artist holds the right to alter, or in any way tamper with, the masterpiece. The museum that houses the artwork, does not enjoy the liberty of "choice" to destroy that which was created by another. Why should it be any different for a mother?

Who can claim provenance for the evolving work of art that is the unborn baby other than God? 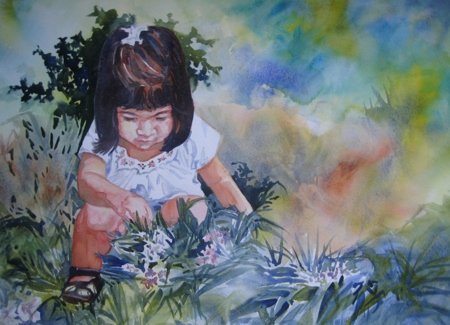 I had a wonderful time affirming my Pro-life sentiments with a commission to paint little Audrey (pictured above). At 18 months she is a vivacious, curious little girl. The young couple who commissioned the watercolor portrait adopted her and Ethan, her older brother. I painted Ethan four years ago when he was about the same age.

Every time I struggle over a portrait, I am awed by the precision of each face. The smallest detail if misaligned, will hinder me from capturing her likeness. At 14 weeks from conception, long before Audrey captivated her adopted parents, her fingerprints were formed. They were completely unique from any other on this planet.

Who are we to question the existence of this energetic bundle of life? How dare we contemplate denying her the right to play, pick flowers or chase butterflies?