The Jewish prayer shawl has a fringe of blue with a fascinating history. Just like the study of red, crimson, and scarlet in the Bible, studying the use of blue is useful. Was the color blue used in the Bible as precisely as the reds were? Is there consistent, latent symbolism in its use throughout Scripture? 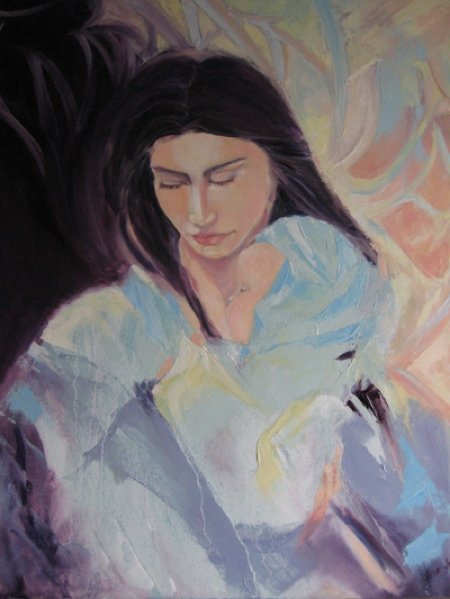 The Hebrew word for the color blue is tĕkeleth - a mysterious color that was intriguing to research. It is used primarily in the Old Testament, to describe a mandated color for the woven, embroidered furnishings of the tabernacle.

Craftsmen supernaturally filled with the requisite wisdom were commanded to weave this dyed blue linen or wool fabric into specific designs for various details of the tabernacle. Some of these included the covering for the Table of the Presence, veils and curtains, coverings over hides of sea cows, clothing of the priests and the fringe of the prayer shawl. In Exodus, you can read about the craftsmen working furiously to create with consummate skill embroideries in this rare and unusual blue.

Somehow, despite being in the desert, they not only had access to this precious color, but also the skill to weave it into the precise patterns, as commanded by God. (Ex 29-39)

God used color, in this case an elusive blue, to impart one more subtle truth, one that fills me with awe at the precision of its usage. 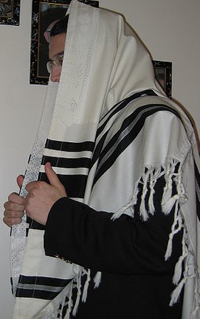 The exact color of the fringe of the prayer shawl remains a mystery, but is often described by some Rabbis as resembling the blue of the sea, reflecting the sky, and resembling God’s seat of glory.

Somewhere in the history of Israel, the technology for producing this dye was lost, perhaps with the exile. The weavers of the prayer shawl were a distinct family group. The Sabourjians, traditionally hail from Aradan, Mr. Mahmoud Ahmadinejad's birthplace, and the name derives from "weaver of the Sabour", the name for the Jewish Tallit shawl in Persia!

There is vigorous debate about what exactly was used in the production of the dye. Scholars guess that it came from the gland of a snail found in the northern coasts of Israel.

This blue came at an exorbitant price because of the complexity of extraction, and because it took roughly 12,000 snails to produce 1.4 grams of the dye! Is it any wonder then that this mysterious blue was used to symbolize royalty?

As contemporary artists, we may best understand the biblical blue of the prayer shawl to be the same hue as the royal blue of the Israeli flag. 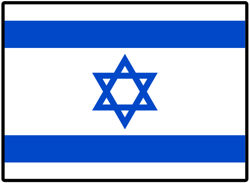 So is it consistently used to denote royalty elsewhere in Scripture, besides Exodus?

Absolutely! In Esther 1:6 there is a description of a fabulous party in the royal palace thrown by Xerxes, one of the most powerful rulers of the ancient world. The same luxurious blue is the color of his fine linen royal drapes that hung from silver and marble columns in his garden. In Esther 8:15 Mordecai is honored as he "left the king's presence wearing royal garments of blue.” Eze 23:6 talks of Assyrian governors and commanders clothed in royal blue.

But of all these examples the one that inspired me was the blue of the prayer shawl and the command in Numbers.

"The Lord said to Moses: Speak to the Israelites and instruct them to make for themselves fringes on the corners of their garments throughout the ages; let them attach a cord of blue to the fringe at each corner. That shall be your fringe; look at it and recall all the commandments of the Lord and observe them, so that you do not follow your heart and eyes in your lustful urge." Num 15:38-39

The poem below about the prayer shawl is the result!

Google a ‘tallit’ and you will find
Tallitots of every size and kind
Woven, striated or custom made
Creamy in wool of the highest grade

Brags the seller, its wool of great weight
The fringes hang heavy, no matter your gait
The shawl sits squarely whenever you pray
With hand-knotted tassels that won’t tear away

Oh, to be wrapped in its heavy warmth
Ancient holy tent, this soft prayer cloth
Remember the One who donned the blue
Spoke words of power, timeless and true

Mocking and laughing, they called Him a fool
Wrapped in such fine unsullied lamb’s wool
His mantle of prayer worn with gravity
Cord of royal blue the brand of divinity

A soldier won His tallit by impious lot
As others watched on, in horror distraught
Stripped of His mantle of blue and cream
Naked and exposed like an awful dream

Yet upon His shoulders rests all government
More squarely than any hand-woven garment
Unblemished Lamb, who honored the blue
Not slave to lusts but to the law ever true.

How compelling the image of that prayer shawl is with its fringe of blue, worn with authority as Jesus stood up to read from the scroll of Isaiah, proclaiming the fulfillment of centuries of prophecies! (Isaiah 61)

Because of the loss of the precise recipe for the blue dye, the fringes of the prayer shawl stopped carrying the tassels of blue. They were laboriously knotted, each knot holding great significance in the minds of the weavers, the rabbis, and those who wore them. But the fringe remained white and was replaced with broad bands of blue or black right on the body of the shawl, as seen in the image above.

The color source of that unusual blue remained a mystery, because the color obtained from the snail, Murex trunculus tended towards purple. There is ample archaeological evidence in Tyre of mounds of shells dating from the Biblical period, which were broken in the exact spot necessary to obtain the dyestuff. Chemical analysis of blue stains on vats from 1200 BC, reveals patterns consistent with those of this snail, corroborating the Bible’s reference to Tyre as the leader in the trading of this dye.

Scholars now realize that in the dyeing process, exposure to the Mediterranean sun can cause the brilliant blue to turn purple. Properly extracted and applied, Biblical archaeologists seem to believe that they may have solved the mystery of the royal blue.

I found it amusing that the Rabbis applied the command in Numbers literally. Since they were commanded to "look at it and recall the commandments of the Lord”, they only permitted the wearing of the prayer shawl at dawn for the Morning Prayer. (except on the Day of Atonement)

In fact, the precise time for donning it was when the blue could be seen as distinctly different from purple, in the predawn light! Seems like a classic case of straining a gnat and swallowing a camel! (Mat 23:24)

When I was mulling all this over, I painted the oil painting Immanuel shown above. I found myself unconsciously exploring in the medium of oil paint, the perplexity of what that Biblical blue must have been like. Was it more purple or more cerulean, was it ultramarine or more cobalt?

Immanuel, or Jesus the Messiah, was the only one, besides Melchizedek, who was both a king and a priest. God deliberately kept both those roles distinctly separate from each other in the Old Testament.

What joy to discover that we must become familiar with this royal blue because of who we now are, in Christ - joint heirs!

"And hast made us unto our God kings and priests: and we shall reign on the earth. Rev 5 :10"

"And hath made us kings and priests unto God and his Father; to him [be] glory and dominion for ever and ever. Amen." Rev 1:6

That refers to both you and me, friend! What an incredible promise to look forward to - it certainly makes blue a more meaningful color for me. I hope it does the same for you.