An Interesting Definition of Creativity
By Sgt. James Baxter USMC

With his generous permission, I have included some of his thoughts below. 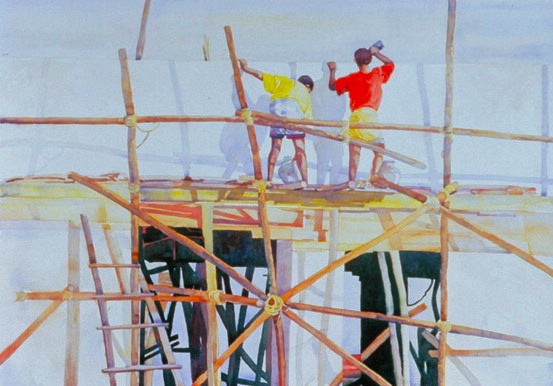 The Builders, Watercolor by Sara Joseph

"Each individual human being possesses a unique, highly developed, and sensitive perception of variety. Thus aware, man is endowed with a natural capability for enacting mental and physical selectivity. Quantitative and qualitative choice making, thus lends itself as the superior basis of an active intelligence.

The human being is earth's Choice Maker. His title describes his definitive and typifying characteristic. His other features are but vehicles of experience, intent on the development of perceptive awareness and the following acts of decision and choice.

The products of man cannot define him, for they are the fruit of the discerning and choice making process. They include

The arts and the sciences of man, as with his habits, customs, and traditions, are the creative harvest of his perceptive and selective powers.

Creativity, the creative process, is a choice-making process.

His articles, constructs, and commodities, however marvelous to behold, deserve neither awe nor idolatry for man, nor is his contrivance, earth's own highest expression of the creative process.

The sublime and significant act of choosing is, itself, the Archimedean fulcrum upon which man levers and redirects the forces of cause and effect, to an elected level of quality and diversity.

Further, it orients him toward a natural environmental opportunity, freedom, and bestows earth's title, The Choice Maker, on his singular and plural brow.

Tampering with man's selective nature endangers his survival, for it would render him impotent and obsolete, by denying the tools of variety, individuality, perception, criteria, selectivity, and progress.

Wisdom only just begins with a respectful acknowledgment of the Creator, the Creation, and the Choice Maker. Without that understanding man will be ever learning, but never coming to a knowledge of the truth.

The rejection of Creator-initiated standards, relegates the mind of man to its own primitive, empirical, and delimited devices.

The human intellect cannot ascend and function at any level higher than the criteria, by which it perceives and measures values. Additionally, such rejection of transcendent criteria self-denies man the vision and foresight, essential to decision-making for survival and progression.

He is left, instead, with the redundant wreckage of expensive hindsight, including human institutions characterized by averages, mediocrity, and regression.

Humanism, mired in the circular and mundane egocentric predicament, is ill-equipped to produce transcendent criteria.

The carnal-ego rejects criteria and self-discipline, for such instruments are tools of the mind and the attitude. The appetites of the flesh have no need of standards, for at the point of contention, standards are perceived as alien, restrictive and inhibiting.

Yet, the very survival of our physical nature itself depends upon a maintained sovereignty of the mind and of the spirit.

Man is thus afforded the prime tool of the intellect - a transcendent standard by which he may measure values in experience, anticipate results, and make enlightened and visionary choices.

Only the unique and superior God-man Person, can deservedly displace the ego-person, from his predicament and free the individual to measure values and choose in a more excellent way.

That sublime Person was indicated in the words of the prophet Amos, "...said the Lord, Behold, I will set a plumb line in the midst of my people Israel." Y'shua Mashiyach Jesus said,  "If I be lifted up I will draw all men unto myself."

As long as some choose to abdicate their personal reality and submit to the delusions of humanism, determinism, and collectivism, they will be reacting only, to be tossed by every impulse emanating from others.

Those who abdicate such reality may, in perfect justice, find themselves weighed in the balances of their own choosing." Sgt Jim Baxter, USMC

"Above all I see an ability to choose the better from the worse that has made possible life's progress."  Charles Lindbergh

Other ideas on Creativity