Is your Christian witness any different from your testimony? Perhaps you think that I am splitting hairs by separating the two. We are marooned in a culture where there are glaring inconsistencies in the faith some affirm and the lives they lead. 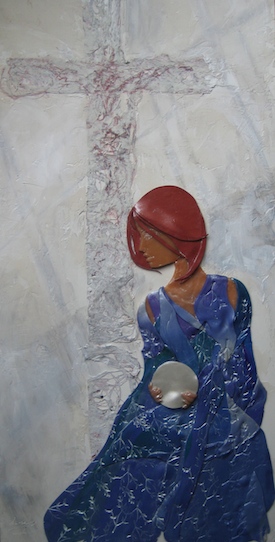 Our human nature is prone to pitfalls of inconsistency that the Bible warns about. Not wanting to be victim to the same, it helps to be aware of some of what could hinder my Christian witness from examples from the Bible, from history, as well as from contemporary culture. Perhaps what I explore here may benefit you as a Christian artist.

First, it's useful to differentiate between what I consider my Christian witness, from what is my Christian testimony. My Christian testimony is the deliberate and ongoing expression of my transformation as a new creation in Christ. Each of us can choose to express it in any way we like, whether it is in words, art, music, dance… Go, tell it from whatever mountain is near you!

But my Christian witness is the unseen, yet equally powerful, aspect of my role as a believer. It is expressed in the balance of my life, like the magic between the lines of a great story, absorbed during the musical rests of a marvelous symphony, or sensed in the quiet passages of muted color on a canvas. It is the reflection of Jesus in the other arenas of my life, outside my art or creative expression. Both are potent in their impact. Without one, the other would be meaningless. Yet both my witness and testimony must be consistent to truly be effective. Ah! But who evaluates that?

Whether we perceive effectiveness or not, we are constantly being evaluated, judged and watched by an audience that is hostile or neutral. They are far more likely to be delighted or offended by our flaws, than to be intrigued by our faithfulness. We are to be both the messenger and the message in one consistent, easy-to-read package. This is a far from effortless task, instead it is one that I find takes the grace of God and His empowering!

A post from a popular atheist blog dealt with the "confession" of an atheist. He once wrote successful "Christian music" for some of the biggest names in the industry and won Dove and Grammy awards. The son of a Christian pastor, he composed music since he was a child, won acclaim over the years and now has a large following.

“Finally, while in Nashville, I allowed myself to embrace my inner atheist (privately), all the while writing and recording Christian music,” he wrote. His primary concern with this "embrace" was the following:

“I’m trapped: If I “come out” as an atheist, I’ll lose fans in droves. But by not doing so, I’m condemning myself to the torture of fans who assume I’m still a Christian.“

The "torture" that he described was his conflict at the admiration of his Christian fans, who wrote “We thank the Lord for your ministry!” and offered other similar expressions of gratitude.

His greatest concern is most telling. How was he to maintain his fan base and the financial status that their favor conferred, without being subject to the "torture" of their praise? After some struggle he talked about tiring of his double life.

What was even more troubling were those who commented on his "coming out" post, stating that his atheistic views would have no bearing on their enjoyment of his music!

Does Christian music, written by a professing atheist not disturb you if the music is well conceived and masterfully executed? How do you feel about Christian art, created by an artist given to drunken brawls?

Does the character of the person have no bearing on the talent on display?

A surprisingly significant amount of famous Christian art work by the masters of the past, was created by artists whose personal lives would make most of us wince in shame. Does that surprise you? Caravaggio who created powerful Biblical illustrations that the world lauded, was known for a sordid lifestyle. Most of what we know of his personal life was retrieved from court documents, rather like picking through garbage hoping to find something of worth. In his brief life, he murdered a man, was known for brawling, even with his patrons, and was constantly fleeing justice. Yet he revolutionized painting with his chiaroscuro style.

The world was moved by the talent of Caravaggio, but he was a sorry Christian witness. So what makes a successful Christian witness? Most of us, who came to the faith because of the integrity of an effective Christian witness, do not need to have the obvious pointed out to us. Those who led us to Christ were irresistible in their personality and character.

True, they were flawed human beings, but they exuded enough of Jesus to make us yearn for what was apparently missing in our lives. In the unspoken aspects of their lives they possessed an authentic integrity that was like a magnet snapping us to attention and drawing us closer. If you have never yet encountered such a Christian witness, it would probably not surprise me, since they seem to be getting increasingly difficult to find.

The Christian witness who wields the most power is one who lives by the Living Word. They are those who demonstrate that the words in the Book are infinitely precious by living them out. They allow the renewing of their minds by that Word to permeate all their actions.

Jesus describes this best in Mt 13:46  when he talks about the man  "who, when he had found one pearl of great price, went and sold all that he had, and bought it."

This man expressed his heartfelt response to the discovery of the treasure by his actions. He demonstrated that all that he owned thus far paled in comparison to this pearl of great price. What better witness to anyone observing his actions of the priceless worth of his treasure!

Our Christian witness is therefore inseparable from that which we proclaim. We are ineffective, despite who lauds our creativity, if we do not dwell in Jesus, the Vine, and submit ourselves to the husbandman for nourishment and pruning. We cannot separate ourselves, skin from seed, or stem from flesh. We are an organic whole in a constant state of being and growing.

While others may admire the color of our fruit, perhaps represented by our fame and influence, or their luscious size (our financial successes?), there is only one opinion that truly counts!

The opinion of the harvester of the fruit is paramount. He looks for what cannot be seen by outward appearances. Unimpressed by merely its physical presence, He will evaluate it. Jesus has a lot to say about bearing fruit in the Bible, using that as an analogy for effectiveness in his kingdom. Make no mistake; He is a fastidious husbandman of his vineyard.

So beware of allowing fame, or the lack of acclaim of your artwork, or those of your contemporaries, to detract you from the fact that the authenticity of your Christian witness will be evaluated by His standards, not those of the world.

Perhaps, art has yet to be created by those who are authentic Christian witnesses in these trying times. Are you up to the challenge?

Is God Real?
The Master's Commission
Common Challenges
A Strange Belief
Return from A Christian Witness to Home