Christian beliefs can be perplexing, wouldn't you agree?

"Hearken", oil on canvas, Sara Joseph, inspired by the promises of blessings (Deut 28:1-13), for all who hearken and obey the voice and commands of God. 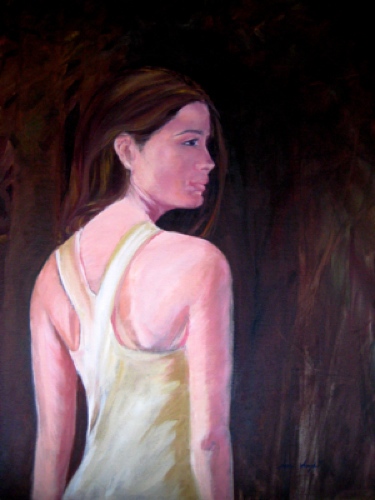 To someone who knows nothing of Christianity, a visit to a church can be a confounding experience. People sing songs about blood and death with great joy, or in solemn reverence, depending on the church you attend! During a lull in the music, a hushed silence precedes a speech on topics foreign to modern life – stories about reapers and sowers, giants and wars, revelations and lamentations… Even more confusing is the alien language. The speech, called a "sermon", is peppered with words like "covetousness, redemption, sanctification, justification, and resurrection…."

So if I had to make it plain to someone who was completely new to all Christian beliefs, what would I say? What core belief of Christianity makes it compelling , unique, and totally different from any other religion?

Of all the Christian beliefs, this radical one turned my life inside out. It affected me so deeply that at first I had a hard time wrapping my mind around it.

Some new friends talked about God during a casual conversation as if He was someone they had spoken to just a few minutes before! I vividly remember my astonishment. To me, God was a remote entity, to whom you prayed grand and vague prayers about ending poverty, healing sick people everywhere… prayers that you never really expected an answer to.

In my kind of prayer, there was a sense of consolation in knowing that at least I had voiced a great human concern, to whoever was out there listening – but no expectation of anything more than that.

These friends however, spoke in a manner that implied an almost face-to-face conversation with God – speaking to and hearing back from Him! While tempted to dismiss them as delusional, I was forced to acknowledge the fact that there was little else about them that appeared crazy! 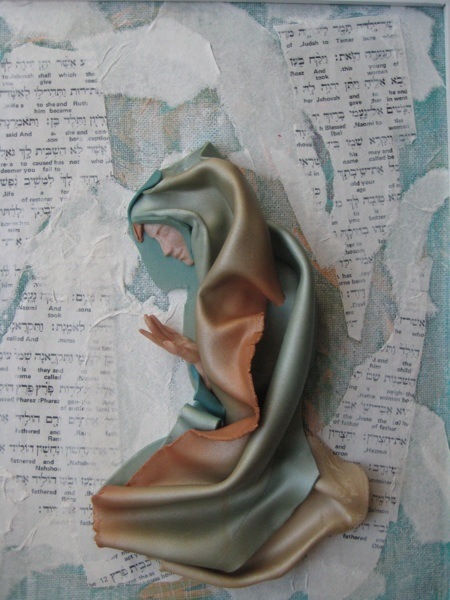 "Ruth", Polymer Clay Relief Sculpture, Sara Joseph. Like me, Ruth was a Gentile. She was the great grandmother of Jesus, many generations removed, included into God's family, because of her total surrender to God's purposes.

When they invited me to my first prayer meeting, I listened in envious curiosity as they brought their every little concern to God, trusting in His interest and concern by expecting a response! They spoke as if He was physically present, sitting in one of the unoccupied chairs, sharing the same space that we were in!

This was the best kind of friend to have, I thought longingly, – one who patiently listened to every silly fear, who seemed to care about their kindergartner's safety on a field trip, was okay with their apology for less than courteous behavior earlier in the day….

The next time, I listened in amazement as they gathered together to thank God for each of those prayers being answered as they had prayed. This happened simply too often to be mere coincidence.

You can engage in a conversation with God, because no matter who you are, or what you’ve done, He loves you.

He has actually made a way for you to communicate with Him any time you choose. This conversation is like no other because of who He is. Any interaction with Him changes you from the inside out.

If you are listening for an audible voice you may be disappointed. However, since God has also spoken audibly on a few occasions in history, I dare not rule it out entirely. But just because He does not routinely speak in an audible voice does not mean that He does not speak at all. He communes Spirit to spirit in non verbal conversations, authenticated by circumstantial answers as my friends vividly demonstrated.

Once begun in sincerity, these conversations are intimate, possessing a strange power to help you live an unusual and exciting life. Life then becomes a matter of listening, hearing and doing what He tells you and then watching in amazement as impossibilities become commonplace! That about sums it up.

Those friends quickly inspired me to try some of my own timid conversations, with astounding results. God not only answered, but also guided me to His enormous book called the Bible, to find every instruction I would ever need, to continue our conversations.

The Bible appeared to be in an almost undecipherable code, until I asked for His help to understand it. Then suddenly the words started talking to me as well. That was over 20 years ago!

Of all the strange Christian beliefs, believing that the God who created the entire universe is interested in hearing from each of us, is truly the most fantastic. That we can hear back from Him, as well as talk to Him, is even more astounding.

Initially I brushed off the changing circumstances in my life as simply co-incidence. But when the frequency and the improbability of all that was happening began screaming at me, I was force to acknowledge that God was indeed answering my prayers!

We were having a conversation.

Sadly, of all the much-discussed Christian beliefs in contemporary Christianity, this one is not often given the prominence that it deserves. It requires no great theology, except simplicity of heart and eager expectation, like that of a child.

A recent conversation that I had with Him may encourage you. Discouraged about the slow sales of my work from one of the galleries, I asked for Him to make it clear to me why I should persist in this venue. Would it not be better to search for greener pastures?

I got my answer rather swiftly. Before the day was out, I sold a work entitled ‘The Burnt Offering’. In a flash I understood. I had numerous paintings and sculptures at the gallery, but this was created as an offering of myself to Him.

I had pledged to be guided by His will and not mine! I was to stay. I was to practice what I had resolved to do while creating the work – to submit myself as a burnt offering to be wholly consumed, submitted only to His will, not other circumstances. Coincidence? Conclusions drawn from my own mind? No, I have learned better.

Such conversations with Him have marked my life for the last two decades. I have endured and persisted longer than I would ever have on my own. He has never led me astray, or caused me harm. Instead, I have steadily grown in trusting Him. I chatter away with Him constantly and you can too!

Put this strange Christian belief to practice, and see if it does not turn your life upside down.

The God who created you, is eager for you to talk to Him, as if He were your dearest friend.

Tell Him about your aspirations, your sadness, your regrets, your hopes your dreams – things you’ve never told another soul. Ask Him for direction, guidance, and lessons on how to grow… Then watch in eager expectation, as He works with swiftness to assure you that He truly cares, as no one else ever can, or ever will.