Faith and Liberty Discovery Center is a new museum in Philadelphia, Pennsylvania, where one of my polymer clay sculptures is now on display. I'd like to tell you about how unlikely, (but characteristic of God) this is for me!

For rather obvious reasons, I am fascinated with biblical Sara, thinking long upon her challenges and choices. Of the many verses describing her beauty, character and story, Hebrews 11:11 is my favorite.

“Through faith also Sara herself received strength to conceive seed, and was delivered of a child when she was past age, because she judged him faithful who had promised."  Hebrews 11:11 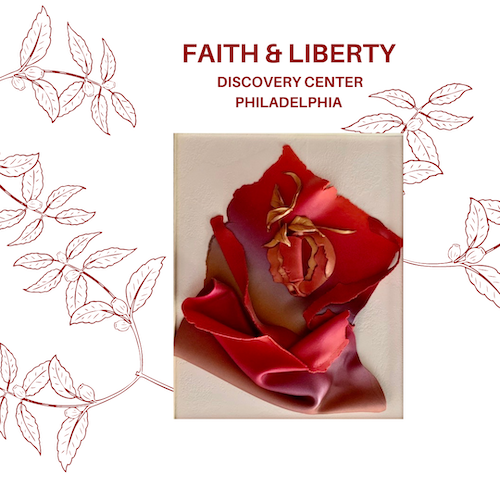 Her challenge was impossible, her response of faith is attainable, and her outcome is more than worth the struggle.

She was well "past age." Time had passed. Time, which could never be recovered—or so she thought.  As an artist, I’ve felt the familiar urgency of the ticking clock. Years that could have been poured into art without distraction were spent raising a family. Those were wonderful years and I do not regret them in the least. But they are now out of reach in my past. Being ”past age” is a reminder that time is limited and possibilities appear to be narrowing.

Except that it is not entirely true! All things are possible with God.

When I was a young mother creating art in the smallest pockets of hard won time, I never dreamed that some day God would bless the work of my hands in a manner that was meaningful to me. Gradually Biblical truth reordered my priorities, and expanded my expectations. As God’s gift of creating artwork unfolded in my life, I was treated to many unexpected blessings.

His word encouraged me to dream bigger, but differently.  While I did not crave acclaim, I expected affirmation from God, which He often graciously granted.  I did not crave financial success by any worldly standard. There was no need, I knew that with God I could continually live in abundance, without lack. Listening for His (inaudible) voice, and attempting to obey to the best of my ability, became my narrow but effective focus.  As a result, adventures with Him have been wonderful, varied, and completely unexpected.

In 2020, the American Bible Society selected  one of my polymer clay relief sculptures, created on an ordinary day in the studio, for an exhibit that is extremely meaningful to me. Faith and Liberty Discovery Center, a museum dedicated to exploring the Judeo Christian heritage of this great nation, opened on May 1, 2021.

This museum is located on what many consider to be America’s most historic mile in Philadelphia, on Independence Mall. It is just a short walk from the Liberty Bell! As a grateful immigrant, who benefited from America’s Christian heritage, this is a privilege, an impossible event that I did not seek out, but I know God orchestrated.

I pray that artists, who feel stretched thin, longing to create work, but finding themselves trapped in the responsibilities of life can find hope in my story, and even more so, from that of Biblical Sara.

The kingdom of God operates on the principle of the parable of the sower. A single promise from God is potent seed, sufficient to birth the impossible. The Bible is full of promises inviting faith in a powerful God willing to engage in sweet fellowship. The power of seeds, like God’s promises, are disguised and seem insignificant. Yet when planted in the human heart and nurtured by faith, they have the power to birth the impossible. In biblical Sara’s case, it was a baby at ninety!

Seeds, like promises, also operate on a mysterious, unpredictable timeline. Germination will eventually be visible—yet we can never be certain when that will be. Harvest, or fulfillment, happens on God’s timeline, not ours.

The same trust in God, when nothing is visible, must be maintained when the first tender sprout appears to be discouragingly small. Then later, when there is lush growth, but no fruit, we must still wait expectantly.  One day, if nurtured, seed will produce fruit. Fruitfulness is God’s idea and His intent for every promise in the Bible.

Like Sara, judging God faithful through all the seasons of the faith journey is both a challenging, yet rewarding, aspect of being a Christian.

The reward for persevering is actually far more than just the fulfillment of a  promise. Isaac was a blessing, no doubt. But the greater reward was that God had chosen her to demonstrate this rigorous and challenging process of faith. Every time she heard Isaac laugh or watched him run, her thoughts must have turned heavenward, in awe of a God who promised and was faithful! Every memory of the struggle to believe God’s promise to her, and her relief that she chose to believe anyway, must have been revisited often.

Releasing Isaac to be sacrificed on Mount Moriah would have been easier because she had already learned that God was faithful.  I’m convinced she earned her place in Hebrews 11 because she learned to trust God even when her beloved son’s future was threatened. She remained secure in His promise that many nations would spring from Isaac some day, so he could not possibly be doomed to destruction.

But what has this to do with art? Entrusting our feeble attempts at creativity to God is an act of faith. He promises to bless the work of our hands and declares that His gifts and calling are irrevocable.

Surely, like Biblical Sara we can also “judge Him faithful who promised.” Just like her unlikely story, may my account of having the work of my hands in a museum, when I did not seek it out, encourage you. This is merely another colorful account in my story, no more or less important than having my art minister to someone hungry for God's peace. None of it was my doing, which makes the journey exciting.

May you be encouraged to embark on adventures of your own with Jesus, to enjoy outcomes only He could orchestrate.