Christian poems are frequently found on sympathy or Get-well cards. Occasionally  poetic words are employed to encourage or to give thanks. Exceptional rhythms of the Christian poems of the past often become the praise songs or hymns of today. 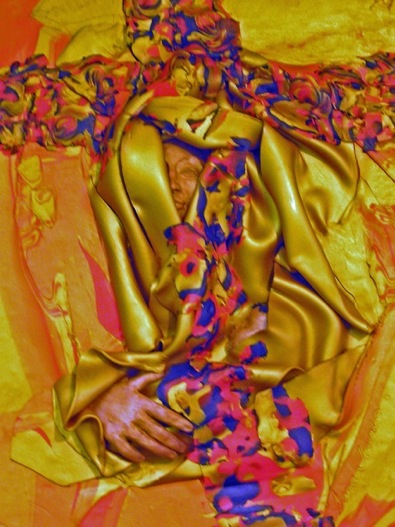 I don't always write poetry for the sculptures that I create. However, there are instances when poetry gives a necessary verbal dimension to the visual composition. It was the case for this piece, The Supreme Gift.  It is 24x24"on a wood panel.

The poem below sought to express possibilities that I had not considered before, as I thought about Psalm 23,  written by David, the sweet psalmist of Israel, long before Jesus was born.

Surely Jesus must have been taught Psalm 23 like every other little Jewish boy. Mary, His mother, might have whispered its precious words to Him. Perhaps He too had to memorize it, as so many have since it was first penned. I wonder how old He was when He understood the full implication of it's words. Psalm 23 has calmed and comforted so many over the years that I have to imagine that Jesus also availed of its power!

When He endured the ordeal of the cross years later, were those words on His mind?

"Yea, though I walk through the valley of the shadow of death,

Yet will I not fear, for thy rod and staff they comfort me...."

Jesus quoted from Psalm 22 while on the cross; but did He draw His strength from Psalm 23? In those final grueling hours did He remain steadfast, trusting in the promise of those words and the Father who stood behind them?

Did He ponder the mystery of being both the Lamb of God and the Shepherd? Something to think about, isn’t it?

Red - a poem about Rahab
Through the Valley
Sow in Tears, Reap with Joy
Christian Poetry and Art
Psalm 23
Dawn
Return from Christian Poems and Polymer Clay to Christian Artist Home